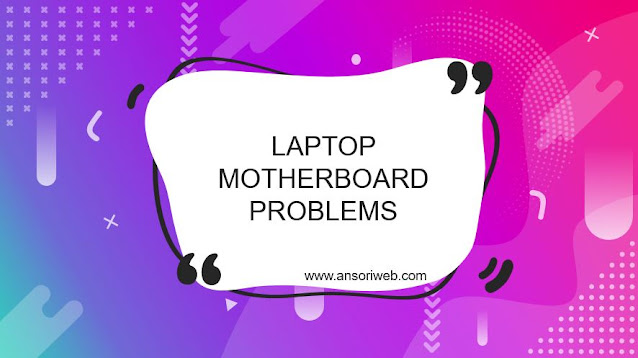 Laptop Motherboard Problems - A Motherboard is an obligatory part of the computer. Be it desktop or laptop, without motherboard your system cannot work. It is an overwhelming thing to fix the problems that arise in motherboards. The functions of motherboards are the same for all computers but they differ in their dimensions and integration from desktop to laptop.

The problems that arise with laptop motherboards and desktops are alike and the steps to rectify them are also almost similar. Here are some symptoms which convey that the motherboard has problems.

Read Too: Troubleshooting For Computer's

There are so many symptoms to find laptop problems but these four are the most common. But it is an abomination to think that the motherboard has gone faulty on the basis of these symptoms. There might be other reasons which might have caused the fault. Sometimes battery problems could also pave way for the laptop to not turn on. So, checking the facts and factors is most important.

If the laptop is turning on, take the battery out of the computer. Check the voltage in the adapter with the help of voltmeter. Check whether the power jack has damaged or not connected to the motherboard. Check for any physical damage in the laptop. Most of the times, the processor could have also gone amiss. So, first check for these conditions and if they all are good then it is definitely a problem with you motherboard.

When parts of the laptop are not working, for instance, if the CD drive is not working, check by replacing the component. Try another CD drive with your laptop. If then the problem persists then the fault lies with your motherboard. On such conditions if you felt that motherboard has gone wrong, then flash the BIOS of the motherboard. The BIOS may also have got corrupted and could have caused this problem.

The laptop may shut down randomly even because of overheating and dust accumulated in its parts. Try blowing air with a compressor fan and if dust is coming out, then it is a good sign that you should wipe those dust off. Now try working with your laptop and if still the laptop turns off randomly the problem just lies with your motherboard.

Any abnormal activities of your laptop may be resulted due to some software problems, virus in the laptop, operating system in the laptop etc. So be thorough that these are not causing the problem. Once you are sure of that than the message is clear. You have to buy a new motherboard