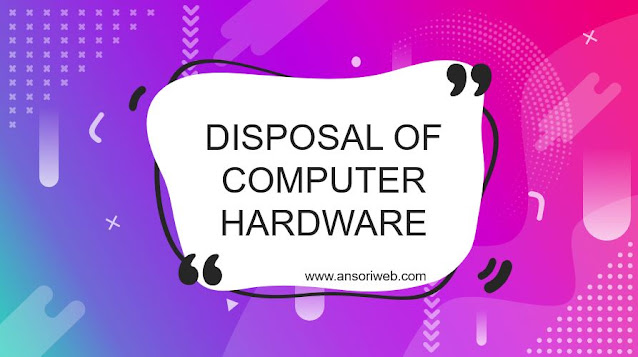 Disposal Of Computer Hardware - With the pace the technology is growing, the computers become so obsolete in a short span of time. The CRT monitors have given way to LCD monitors. The memory space of the computer is expanding and so the speed of the processors also.

So, when things get antediluvian so fast, there arises the problem for proper disposal.

Disposal of electronic goods is a frantic work; especially with computers, it becomes worse. There are certain complicated devices attached to the computer and a lot of minute components which have to be properly disposed.

Computer disposal may seem to be as easy as a “walk in the park” but actually it is not. The computers cannot be dumped in the landfill just like that. But till recent times this method was only followed throughout the world.

Increasing number of out-dated machines made the world nations to formulate a guideline for safe disposal of computer and its hardware components. The reason behind forming the guidelines is that the toxic substance contained in the computer may cause contamination of the land and water bodies if they are dumped.

The lead contained in the monitor (CRT type) causes harm to the environment. The batteries in Laptops contain Toxic acids which may turn fatal to birds and animals.

The validity behind the guidelines is that, instead of dumping the whole machine, some working parts of it can be removed from it and can be recycled. The amount of waste gets decreased and so carbon emissions also. Recycling helps us to conserve the environment.

So now disposing your computer may appear as an uphill task. Isn’t it? But it is actually not. There are professionals who can take care of your computer disposal. They are experts in this concept of destruction and they are also well aware of the guidelines.

Internet is the biggest market where you can find such a professional. They take complete ownership of your machine once you hand over the responsibility to them.

They sanitize the wastes and destroy the hard drives for that could give way to theft of personal information. The parts that are functional are removed for recycling and other components are disposed. In some countries, you can also get discounts on new computers for proper disposal of old ones.

Read To: Reasons For Hard-Drive Failure

So, keep in mind about these professionals when you are about to dispose your computer. Using a professional will not reduce your burden alone but also they could save the environment by proper disposal and recycling.

0 Response to "Disposal Of Computer Hardware"